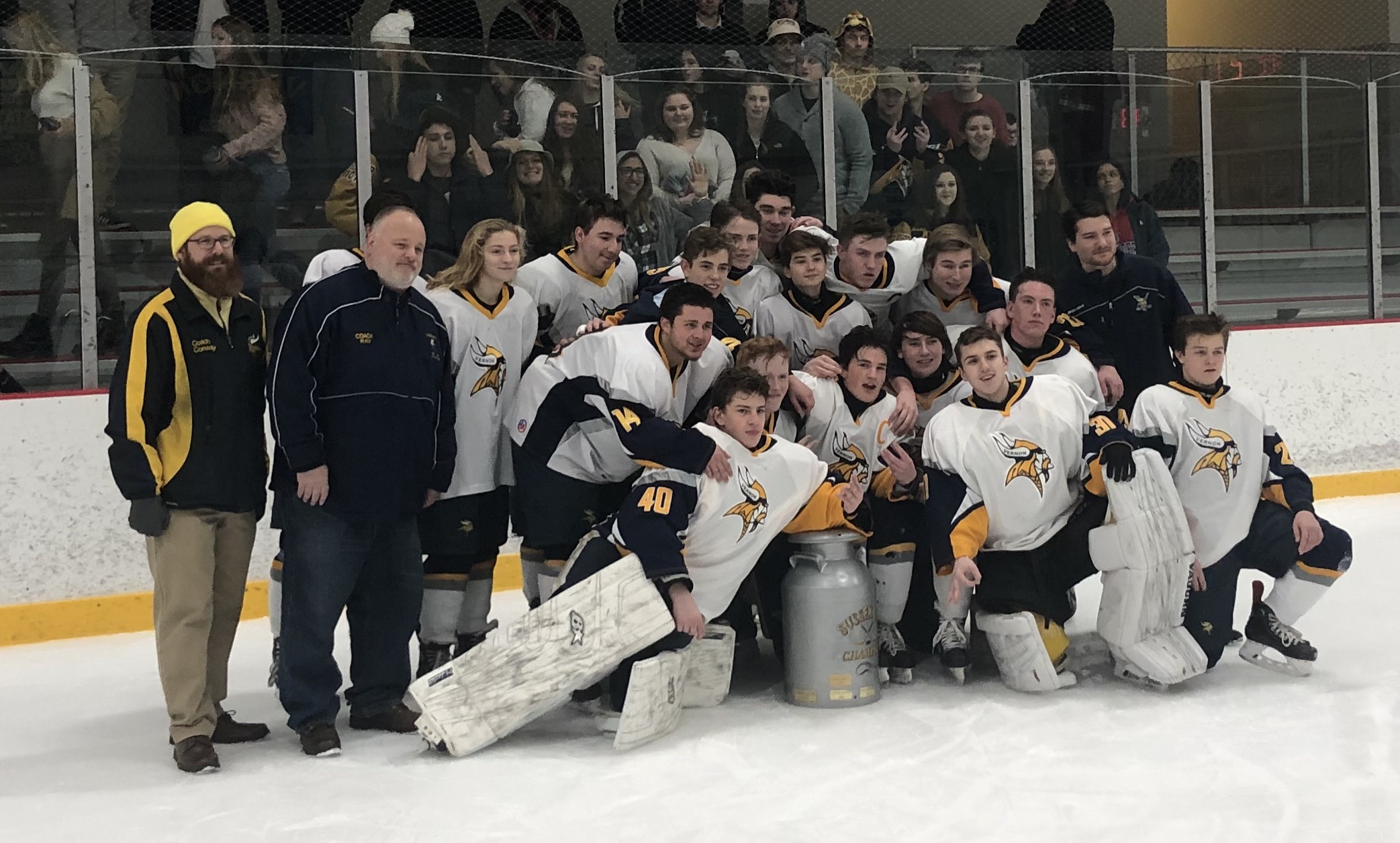 Now, the trophy that had eluded the program for so many years has taken up a permanent residence in Vernon’s trophy case. The Vikings capped off a Sussex Cup three-peat for the first time in program history on Monday as it got off to a fast start en route to a 5-0 win over upstart High Point-Wallkill Valley in the championship game at Skylands Ice World.

It marked the third-straight title and fourth overall for Vernon, which won the initial tournament back in 2006.

“It’s just a great feeling,” senior Jack Bokun, who finished with two goals, said. “Especially for us seniors, it’s the last Sussex Cup game that we’ll ever play in. It’s good to go out with a bang, especially (winning) for the third year in a row and being the first Vernon team to ever do that.”

Bokun and Vernon wasted no time getting things going offensively. Just 24 seconds into the game, Bokun fired one past High Point-Wallkill Valley goalie Tai Ruvo to give his team the early advantage. It didn’t stop there, though, as Adam Driscoll and Shane Brennan (shorthanded) each added goals to give Vernon a three-goal lead just 5:51 into the game. J.T. Doyle assisted on the first two goals.

The early lead was very important as it went up against a High Point-Wallkill Valley team that was making its first appearance in the final in 10 years. Vernon knew that it needed to get on the board early to try to take away any momentum for a potential upset.

“It was definitely huge,” Bokun said. “Playing a team like this, we’ve been successful in the past but in a championship game, upsets are easy to come by. So it was good to get a lead and play with the lead.”

After the early onslaught, High Point-Wallkill appeared to settle down and started to generate some quality chances. In the second period especially, it forced Vernon goalie Jacob King to make some big saves to preserve his team’s advantage. King stopped them all, and finished off a 21-save shutout. High Point-Wallkill Valley goalie Tai Ruvo also had a strong game in keeping his team afloat, as he stopped 49 of the 54 shots he faced.

Vernon essentially put the game away in the third, as Bokun scored his second goal 4:40 into the period, which squashed any momentum that High Point-Wallkill Valley had built in the second. Freshman Evan Steinbach scored his first career goal with 4:09 left to cap the scoring. Cole Brennan assisted on both of the team’s third period goals.

“A lot of us got a bit too comfortable after we scored those three goals,” Brennan said. “That’s definitely not how we should’ve played the game. That’s why we started to slack off a bit in the second period. But we realized that we needed to keep our feet on the pedal and we produced two goals in the third.”

But Vernon finished off the win, and the team got to celebrate yet another Sussex Cup title. The trophy presentation had a bit of a different look this year, though, as last year’s team captains- Patrick Graham, Eric Loughren, and Ryan Eilinger- were given the honor of handing off the trophy to this year’s captains in Shane Brennan and Jack Bokun.

It’s a tradition that Vernon hopes to uphold in the years to come, but for now, it will set its sights on its goals for the rest of the season. The Vikings currently sit in first place in the Halvorsen Division with just three division games left to play, and hanging on to first place and making a run at the Halvorsen Cup are certainly goals the team has in mind, now that it has one trophy already in its possession.